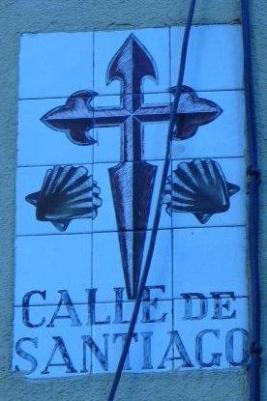 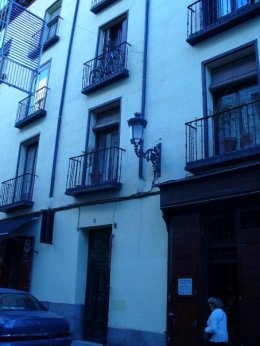 Before I lay my homesickness on you, I will relate my goings-on these past several days.

On Wednesday and Thursday, I emailed my resume to several language academies, as I’m trying to get a part-time tutoring or teaching job. On Friday, my day off, I dressed for my interview and 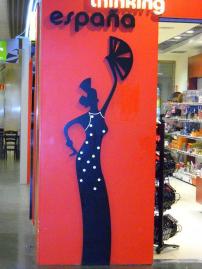 took the Metro to Ruben Dario station. A Spanish girl with a British accent interviewed me and seemed hopeful about my prospects of working with the company. I was delighted to hear that I could find work in the area where I live and would be tutoring only one or two children (brother and sister, for example) in their home. I like tutoring, so that sat well with me. 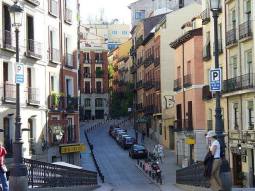 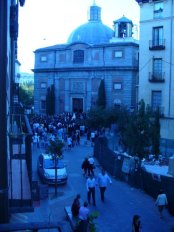 After I came home and wrote in my blog, I prepared myself for a second interview at 4 p.m. I had called an American woman that morning at the International Institute, and she said that even though she had teachers for all her courses, she would meet with me, possibly for January classes. After the short interview, she showed me the downstairs library, which was filled with movies. I told her I would love to check out movies once I get my permanent resident card and a handy extra 10 euros, but since my wallet had been stolen, I couldn’t spend that money yet. In the meantime, I was hoping to go to the public library to check out movies and books for free. Anyway, this place was a nice alternative, as there was also a garden and an area for drinking coffee outside. Later, I went to the Prado Museum, which was free from 6 p.m. to 8 p.m. on Friday nights, but the line was lengthy, so I went to the museum store located across the street, then to the Thyssen Museum, which was not free, and looked around the gift shop. 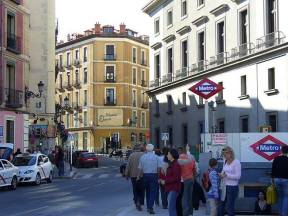 On Saturday morning, all I felt was lonely, forlorn, and isolated for a

different reasons I won’t explain here. Hard as it and everything was, I decided to take my dad’s advice from 1983, when I moved to Austin and was feeling the same way: “Hal, go outside and do something. Go to the library, and stop thinking about yourself.” Sometimes it’s hard not to think about yourself during these times of crisis, but this advice has sometimes served me well over the years. I used my Metro pass, my legs, and my three-surgery feet for nonstop travel that day. 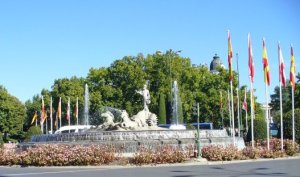 First, I went to the Instituto Cervantes (I attended that school in Chicago), an enormous building with a free exhibit on the cosmos, so I viewed that, not absorbing any of the information but just trying to get my mind off the loneliness. Then I went to another free museum and viewed more art. Later, I walked to the free Archaeological Museum and the National Public Library — more free art — and to the bullfight ring, walking around the outside of it. I strolled along Goya Street and hopped on the train to Debod Temple and — along with the many lovers, as well as brides and grooms being photographed in this lovely spot — viewed the setting sun. Yup. Just me, the brides and grooms, and the lovers. Try to imagine the fun I was having. 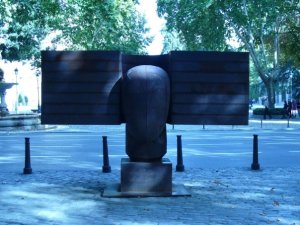 I walked over to Plaza Espana, viewed the statue of Cervantes, walked between booths of artisans selling their wares, and then decided to take the Metro back to my station, Opera, as my map was already torn at the creases, and not only did I have difficulty viewing the streets due to the darkness but also due to the fact that my eyes require reading glasses. My forlorn feeling hadn’t yet vanished, exactly, but these adventures helped my state of mind. I had walked so much on Saturday that by the time I got home, I was very hungry and tired, so I ate dinner and went to bed. 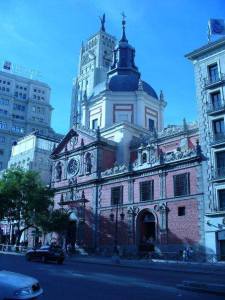 On Sunday, I was emailing my friend in the States and crying while I was typing to her. You can sometimes do everything practical to get your mind off yourself and improve your life, but if your emotions are there, they’re there, and unfortunately, mine were there to hang out for a while. 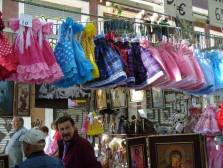 Again, I sought refuge in my dad’s advice, so after taking a shower, I ventured out, once again, to Reina Sofia, the place where I had viewed 10 minutes of a Hitchcock movie the previous Sunday, but I first allowed myself to shop along El Rastro, the flea market I had seen the previous Saturday. There was a huge crowd, and the market went on for what seemed like blocks…and probably was. There were booths of clothes, jewelry, purses, sunglasses, sweaters, art — you name it. I walked through La Latina neighborhood, then walked north on Atocha Ronda over to Reina Sofia, an enormous building. For this free day at the museum, there was a long line for the museum, but it was moving swiftly.

The museum contained a lot of Picasso, Miro, and Dali, some Goya, and several other works of art. Picasso’s Guernica was enormous, and couples were posing beside it. I always find that humorous: An artist has worked long and hard on a piece, and then two girls, one with her lips almost touching the other girl’s cheek, in a near kiss, were holding this pose for at least 10 seconds before their picture was snapped. This pose seemed so odd against Picasso’s Guernica. 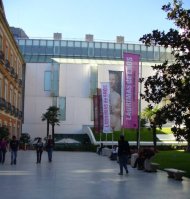 I walked toward home, picking up a few items at the grocery store, wrote more in my blog, and emailed a few friends. Perhaps trying to cheer me up, my good friend Javier, who lives in San Sebastian (Spain), had sent me a downloaded poster of the Klimt film we had seen a year ago in Chicago at the Gene Siskel Theatre. (While Javier and I had been watching the movie, in English, I kept hoping he wouldn’t ask me to summarize the story, as I had had no idea what was going on. We have both found it rather amusing, ever since, to imitate John Malkovich’s seemingly indifferent responses throughout the movie.) 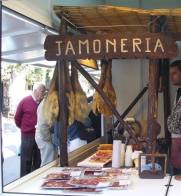 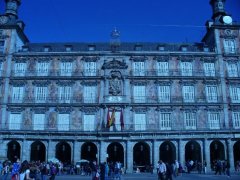 Another source of great amusement is Bob Dylan’s no-musical-range-every-song-sounds-the-same MTV Unplugged, which Javier and I had also viewed a year ago. We had to watch the entire concert, because we were both waiting for the band to play a different song from the first song, but they never did: They played the same song throughout the show: The songs just had different titles, I guess. And Bob Dylan sounded as if his voice could’ve used some WD40. Javier gets a kick out of imitating this: And for my next number, I’d like to sing… [and then he proceeds to imitate Dylan’s monotone, creaky voice. We are much more amused by our imitations of famous people than we are by their work. I’m sure that John Malkovich is better in other movies, and I even like Bob Dylan’s greatest hits double CD, which I gave to my stepmother for her birthday, so I’m not really against either, although I have to admit that John Malkovich isn’t my favorite actor. 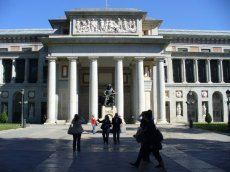 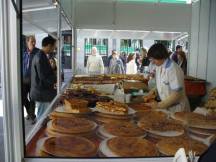 My forlorn feeling was diminishing somewhat on Sunday, plus I had something to look forward to: I was going to meet Ellen, a friend from orientation, at 7:30 p.m. for drinks and tapas. During our conversation, she told me she had worked for the Wall Street Journal for 10 years and had gotten her master’s degree in Spanish from Middlebury College, here in Madrid, so I was calculating that she was at least in her early 30s, which was some comfort to me, considering that most of the group at our orientation were in their twenties. She’s smart, seemingly self-confident, and has a good sense of humor — and it was nice to talk in English with an American, I have to admit. 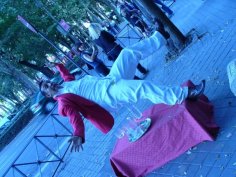 Ellen and I went to a surprisingly cheap tapas bar she knew about and had a couple of glasses of red wine and tapas. We spent about 3 hours there and had a good time. We talked about going to a movie in English, with Spanish subtitles, not Spanish dubbing. She wants to refer to me a pharmacy student who needs help with her English, so I hope to have another tutee.

Feeling better today. I suppose it’s all in a day’s work being in Madrid. It’s another clear, sunny day here. We’ve had this weather almost every day for the nearly 3 weeks I’ve been here. 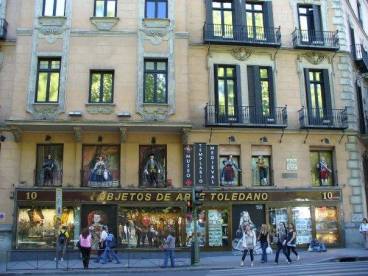 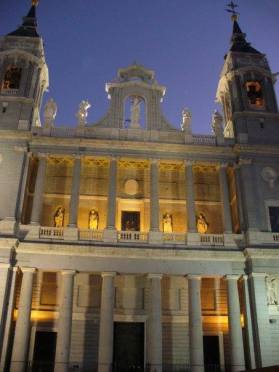 BLOGGER: International Girl in Spain, My English Quarters, Dating Till It’s Over (under construction)

AUTHOR: The Search for Order: T.S. Eliot’s Use of Music and Musical Form

International Girl in Spain is my humorous and real take about the year (2009-2010) I spent teaching English in Spain, as well as my travels to different cities and countries while I was there.